BUY NOW
GET MY MOJATICKET NOW
Previous Next

What is Moja Ticket?

MojaTicket (Moja in Swahili means one) is a secure event ticketing solution that uses bar-code technology to produce secure tickets for events of any type. The MojaTicket product is aimed at helping event organizers maximize ticket sales by reducing ticket duplications through the use of bar-code technology.

MojaTicket is owned by Emveyo Systems (Pty) Ltd and was developed as one of the company's major products in 2011 after spotting a market niche in Swazi event ticketing industry. Over the years, the region has witnessed a gradual increase in the number of small and large scale events. This has been due to the increased recognition and appreciation of local arts and culture, therefore ushering an era of entertainers in sport, concerts, national and corporate events

The problem is, the bigger the event, the more challenging it is to control admissions into these events, particularly venue entry points. MojaTicket identified this challenge as an opportunity to provide promoters and hosts, alike, with a solution that would enable them to purchase and sell affordable pre-sale tickets to decrease the amount of money handled and improve smooth entrance flow at event venues. The solution goes on to ensure financial transparency through reports formulation detailing ticket sales for the various ticket categories. (See "Report Formulation Below").

MojaTicket was established and given the tag-line "One Ticket | Lifetime Access". On 31 December 2012 The Storm Festival hosted at the Hawane Resort became the first event where the MojaTicket product was used.

In 2012 MojaTicket began to gain more recognition as more and more event organizers became aware of the product.

In 2013 MojaTicket evolved from just being a product into a trusted ticketing brand in the Kingdom of Eswatini.

The year 2014 provided an opportunity to develop and launch the kikilikiki App which showcases events happening within the country and allowed clients to order tickets. The App doubles up as a ticket scanning tool for event organizers, as well as providing listing for places, local clothing brands and artist profiles.

In 2015, the MojaTicket product joined the kick-start competition sponsored by Swaziland Beverages. The innovation was able to secure funding for marketing tool kits.

2016 marked the beginning of BIG event ticketing as the product was chosen to be the tickiting solution used at the Eswatini International Tradefair. While at the tradefair, we noticed how well people embraced the concept and learned serveral lessons around improving our solution.

2017 was a year of regrouping as the mix of small and big events started to grow steadily. MojaTicket witnessed a shift around ticketing perceptions in Eswatini as more clients adopted the use of QR Coding as a standard for ticketing. Potential competition started taking note.

2018 was the year of diversification and innovation as the need to create valuable partnerships grew even stronger. MojaTiket was finally available as a presale wristband and receipt ticket in nine (9) Distribution shops country wide. The same year saw the introduction of Email and SMS ticketing.

In 2019 MojaTicket became available online, the WhatsApp ticket was finally born and our cashless digital coupons were introduced. We were honored with providing SMS eCard Invite Services at His Majesty King Mswati III's 51st Birthday Celebration - Halala Mbangazitha! We are officially One step closer to our Vision!

What options are there when it come to ticket scanning?

The event organizer can choose to engage our team of trained personnel to verify tickets at the event.

As a separate option the event organizer can choose to use a 5MP Android Smart-phone to do the scanning instead of using scanners. (NB: The Smart-phone has to have internet connection)

Do you supply wristbands?

We understand that wristbands have become a trend in most events, hence the reason why we do supply event organizers with different colour wristbands on request. Wristbands are provided through one of three solutions:

What online payment methods are available?

At the moment MojaTickets can be bought using VISA/Master Card enabled Debit or Credit Cards. We are working tirelessly to eventually integrate with other Cashless payment gateways to allow for more flexible ticket purchasing methods.

You can buy more than one ticket and use Kikilikiki App to share extra tickets with registered friends and family.

How can I own my tickets?

It is no hidden fact that there are many ticketing systems available out there. The question now is Why Moja Ticket?
Here are some of the features that make our product stand-out from the rest: 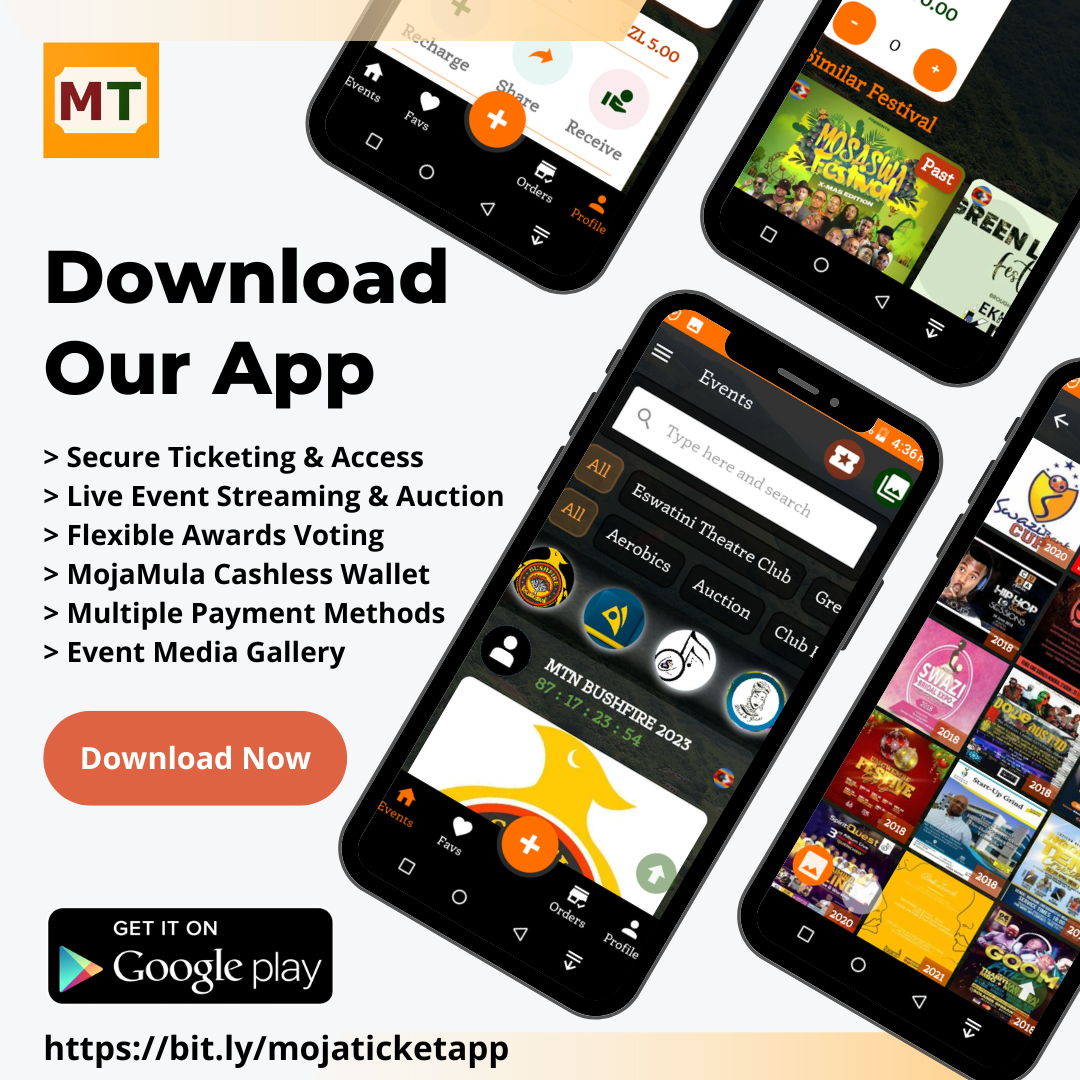 MojaTicket is easily customizable to events/ticketing of any type depending on what the client has requested.

With MojaTicket as your event ticketing solution you can say goodbye to free entry through ticket duplication because the system de-activates every scanned ticket, making it no-longer usable.

Moja Ticket is 100% a Swazi product powered by kikilikiki.com. Through the product, we aim to provide job opportunities for the Swazi youth thus helping government fight unemployment.

New trends in service offering have evolved into mobile and web platforms. At MojaTicket we understand the need of making our product available through different platforms hence the reason why our product is made available both over the web and mobile platform through the MojaTicket App.

Parnterships have been made to assist promoters with presale ticket distribution and real-time sales monitoring
The following initial nine (9) distribution points have been setup across the Kingdom of Eswatini: 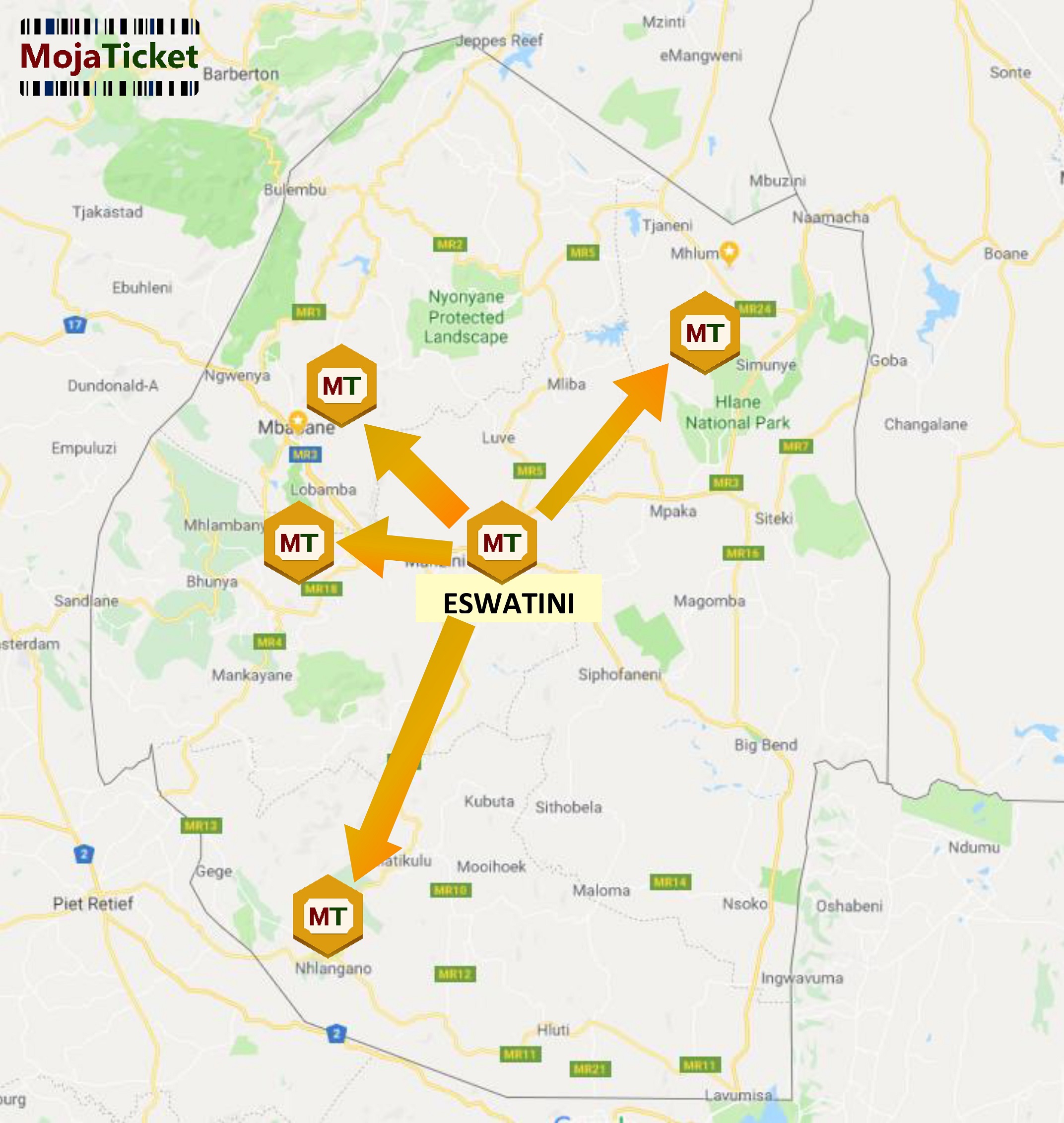 Total Valley Filling Station next to The Gables

Shaks Cellular and Sound MTN at The Gables